"Serve all beings as service to god.

Worship your own, respect all!"

JET Activities commenced in Melbourne some time in 2001. A small group of JET volunteers supported by local residents with mangalasasanam of HH Chinna Jeeyar Swami established JET Melbourne, which started to grow.
In 2002, JET Melbourne organised “Sri Andal Ranganatha Thiru Kalyanam” (A Marriage Ceremony to Deities). Over 400 devotees attended this ceremony, which was a huge success.
Initiative has been praised for bringing vedic culture to Australia. JET Melbourne has been active in the community, promoting Vedic and Spiritual events at various suburbs throughout Melbourne. HH Chinna Jeeyar Swami visited Melbourne in 2003 on his Australia and New Zealand Peace Tour. Since then, the Melbourne chapter has been conducting Vedic, Spiritual, and Community services.
The Melbourne Satsang has also been blessed with Swamiji’s visits in 2007 and 2009,2013. 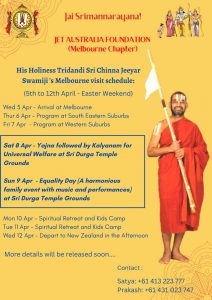 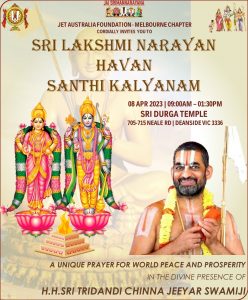